"Vegas and the Mob" - Book Review 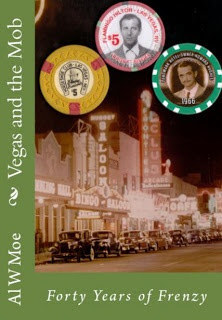 Like stories about Las Vegas? Good, because that's all I've been writing about for the past year. I started with 600 pages of FBI documents on the Mob, Las Vegas, and some interesting characters like Franks Sinatra, Marilyn Monroe, Benny Binion and many others, and found every link possible between them, and what I came away with was that the FBI really snooped into the lives of a lot of people, but they sure didn't do much with their information!

The FBI is a huge investigatve body that keeps tabs on millions of people, and fortunately when it comes to crooks, gangsters, and Las Vegas badguys, their snooping makes for some very interesting findings in the lives of those very same casino owners!

Vegas and the Mob is the story of forty years of frenzy as Mob families fought with players, registered owners, the Nevada Gaming Control Board, the FBI, and even their own members for control of the multi-million dollar empire of Sin in the Desert.

Eventually there were over a dozen Mob-controlled casinos in Downtown Las Vegas and along the Las Vegas Strip. The FBI estimates at least $300 million was skimmed from the casinos as unreported income. What the owners did to control that money is the great story behind Vegas and the Mob. I'm certain you'll find this to be a great  addition to your library!

Thanks for reading - Al W Moe

June 24, 2020
Author Ali Gunn brings us the first in her DCI Mabey series, with The Career Killer, a smart detective-mystery novel. Set in London, the main character works at London Yard, where her father wrote many of the training manuals. She may be her father's daughter, but her fellow detective would have preferred her father's son to be the heir apparent to his legacy.

She doesn't move like Columbo or Hercule Poirot, asking questions and sifting the carnage over in her mind. Instead, she seems to plot the next move of …
Post a Comment
Read more

February 12, 2017
In the simplest terms, Kim Hemphill is a survivor. That's all he knew, that's all he had. And, he's a Seattle Mariner's fan, so things are still tough since the Mariner's have never made it to the World Series, but he's still rooting for them. And, I'm a Mariner's fan, so I know what it's like rooting for the underdog when there's no help in sight.
Of course, that's what Kim's life was like for years. The car he was riding in what hit by a train when he was three years old. The result was cuts, scrapes, bruises and 105 stitches across his face and his scalp. Just an early turning point.
His family life was rough and tumble, and they were so poor he bought himself his first toothbrush when he was 14, shortly before he lost his brother to the Vietnam war.
If you are ready for a tough read, a story of homelessness, a story of learning to live with what you've got on your back and nothing more, then I Remember the Time, Kim Hemphill&#…
Post a Comment
Read more