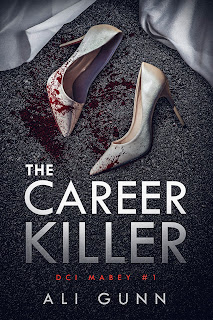 Author Ali Gunn brings us the first in her DCI Mabey series, with The Career Killer, a smart detective-mystery novel. Set in London, the main character works at London Yard, where her father wrote many of the training manuals. She may be her father's daughter, but her fellow detective would have preferred her father's son to be the heir apparent to his legacy.

She doesn't move like Columbo or Hercule Poirot, asking questions and sifting the carnage over in her mind. Instead, she seems to plot the next move of the killer without even admitting it to herself and uses her forensics acuity to find clues necessary to follow the killer who moves with speed and agility while being as elusive as a ghost.

The story takes us from Mabey sorting through her Murder Investigation Team 18 into the streets of London where the bodies keep popping up like tourist attractions across the countryside. At heart, DCI Mabey is a cop, first and foremost, born and bred. But she's still a woman, seeking what her victims seem to have been looking for.

The author gives some backstory on each case, the victims, and a chance to help solve the riddles, but ultimately this mystery story is tough to figure. And, our detective shows many facets of human life, struggle, and difficulty while maintaining dignity in a high-profile case. It's worth the read, but you won't finish the 446 pages in a weekend, although you may feel compelled to try.

Available now on Kindle Unlimited, the 99-cent price is quite nice for such a compelling text.

February 12, 2017
In the simplest terms, Kim Hemphill is a survivor. That's all he knew, that's all he had. And, he's a Seattle Mariner's fan, so things are still tough since the Mariner's have never made it to the World Series, but he's still rooting for them. And, I'm a Mariner's fan, so I know what it's like rooting for the underdog when there's no help in sight.
Of course, that's what Kim's life was like for years. The car he was riding in what hit by a train when he was three years old. The result was cuts, scrapes, bruises and 105 stitches across his face and his scalp. Just an early turning point.
His family life was rough and tumble, and they were so poor he bought himself his first toothbrush when he was 14, shortly before he lost his brother to the Vietnam war.
If you are ready for a tough read, a story of homelessness, a story of learning to live with what you've got on your back and nothing more, then I Remember the Time, Kim Hemphill&#…
Post a Comment
Read more