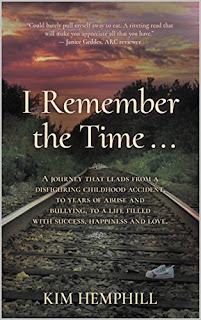 Of course, that's what Kim's life was like for years. The car he was riding in what hit by a train when he was three years old. The result was cuts, scrapes, bruises and 105 stitches across his face and his scalp. Just an early turning point.

His family life was rough and tumble, and they were so poor he bought himself his first toothbrush when he was 14, shortly before he lost his brother to the Vietnam war.

If you are ready for a tough read, a story of homelessness, a story of learning to live with what you've got on your back and nothing more, then I Remember the Time, Kim Hemphill's memoir is for you.

There's much more here than struggle. There's eventual love, success, and reward. There's a new life filled with inventions sold across the United States and Canada, and there are acceptance and satisfaction.

Published January 1, 2017, this book is deep in drama, conflict, and survival. It's also a story of hope and perseverance. You can get a copy on Kindle right now!

June 24, 2020
Author Ali Gunn brings us the first in her DCI Mabey series, with The Career Killer, a smart detective-mystery novel. Set in London, the main character works at London Yard, where her father wrote many of the training manuals. She may be her father's daughter, but her fellow detective would have preferred her father's son to be the heir apparent to his legacy.

She doesn't move like Columbo or Hercule Poirot, asking questions and sifting the carnage over in her mind. Instead, she seems to plot the next move of …
Post a Comment
Read more